JJC is celebrating a big milestone this year – it’s been 115 years since it became the first community college in the United States. That means our college has been around for an insanely long time!

Just to show you how crazy that is:

As we celebrate this outstanding anniversary, we’ve gathered a few #throwback photos from the past via the college’s yearbook archive. 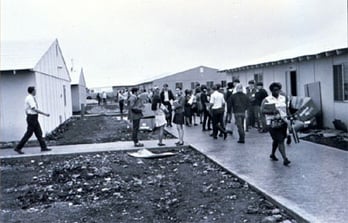 Temporary Buildings, 1960s
As enrollment grew, it became apparent the college needed a separate space to call home. In 1967, preparations began to build a new campus. During the transition period, interim facilities consisting of 17 temporary buildings were erected at the new campus location. 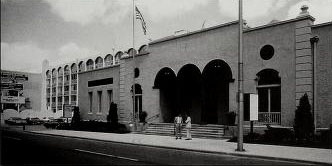 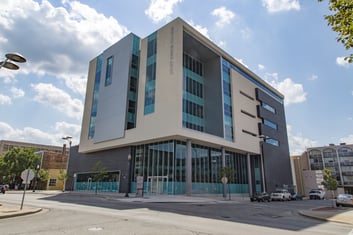 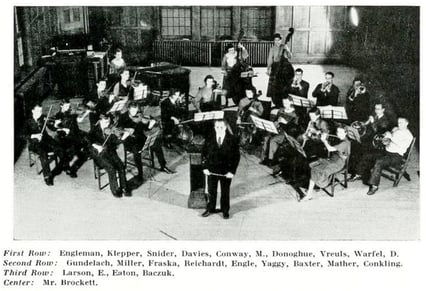 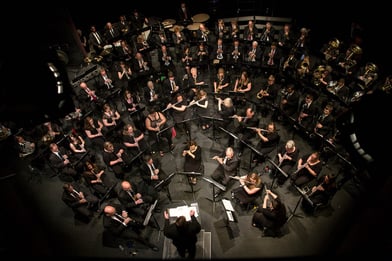 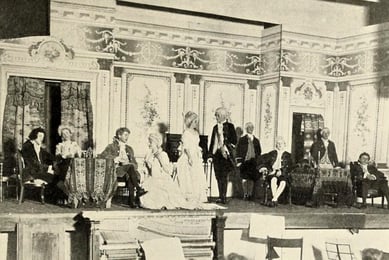 JJC Theatre, 1907
The first recorded JJC play took place in 1907, when students performed “David Garrick." The performance raised money for a statue of French-Canadian explorer Louis Joliet to be put over the entrance of the high school (which still stands today). 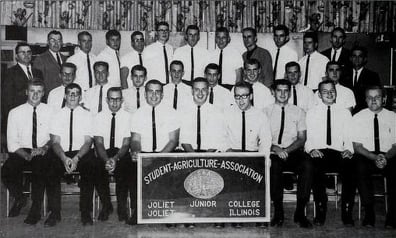 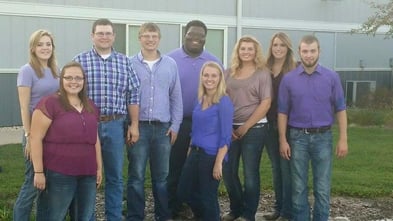 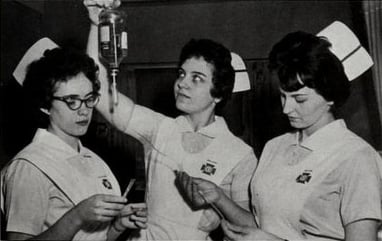 Nursing Students, 1963
In the 1930s as a second World War loomed, a growing need for trained nurses prompted an agreement with JJC and the local Silver Cross Hospital. Students worked closely with the hospital until 1969, when the college introduced its own associate degree program in nursing. 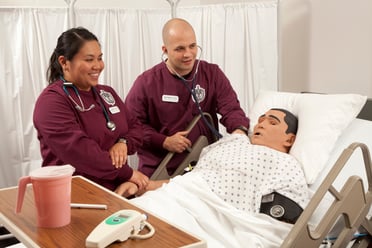 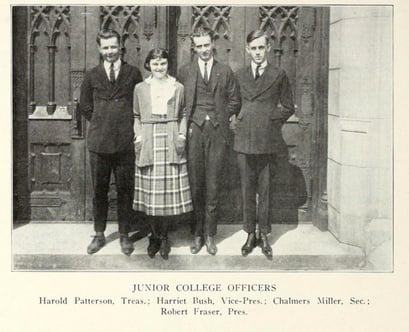 1921 Junior College Officers
JJC students were considered “post-graduates” of Joliet Township High School until 1916. At that point, Superintendent J. Stanley Brown officially designated them as “collegians,” which allowed them to become more separate from the high school. One of the privileges included starting their own student council. This photo is the earliest recorded picture of the JJC student council. 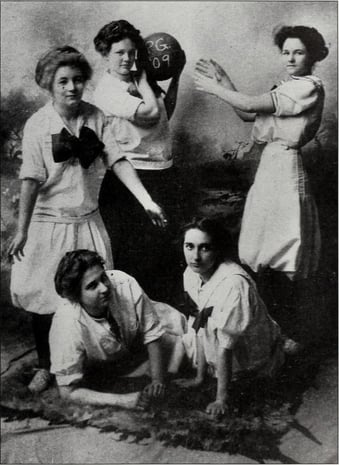 1909 Women's Basketball Team
In 1909, the five-member women’s postgraduate basketball team, known as the “PGs”, won the school championship by defeating the high school seniors 12 to 5. 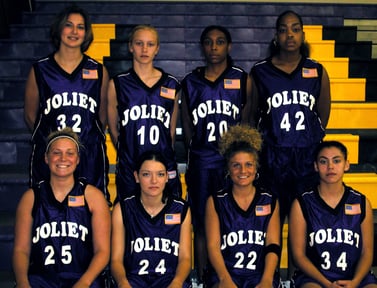 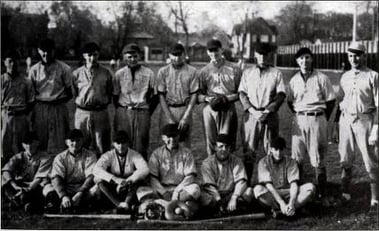 1929 Men's Baseball Team
Legendary JJC coach Aubrey A. “Fizz” Willis (back row, far right) joined the physical education department in 1928. He is pictured here along with the first ever JJC baseball team in 1929. 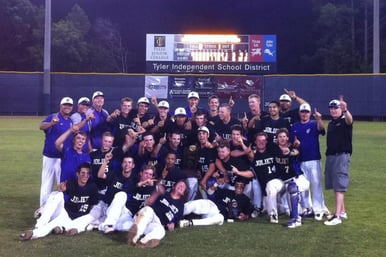 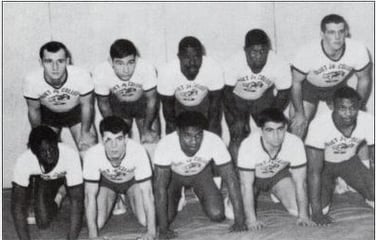 JJC Wrestling Team, 1963-64
The wrestling team in 1963-64 enjoyed a stellar season, including going undefeated in dual meets and tying for first place at the National Junior College Wrestling Tournament in Minnesota. 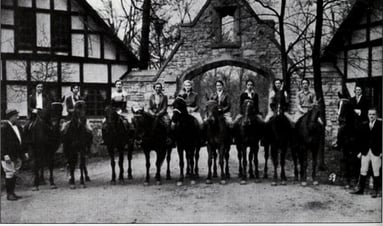 1931 Women's Riding Club
In 1931, horseback riding was one of the activities developed by the Women’s Athletic Association. Pictured here are several female students in the group preparing for a ride in Pilcher Park. 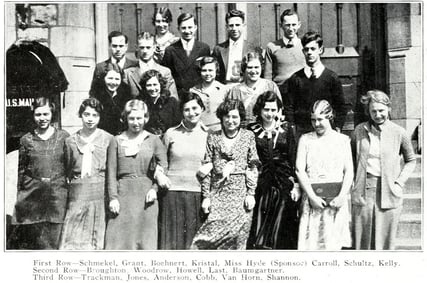 1930-1931 Blazer Staff
The Blazer debuted in October 1929 thanks to the enthusiasm of a small group of students, including The Blazer’s first editor, Bob Balch. In the beginning, the paper was a small newssheet, but when student Herbert Trackman took over as editor in spring 1931, the paper was expanded to a bigger, four-column sheet.

Spring 2016 Blazer Staff
Today, the Blazer’s staff is still reporting on important news, events and sports around JJC’s campuses and education centers. In addition to circulating their print edition, the staff manages a website, www.jjcblazer.com. 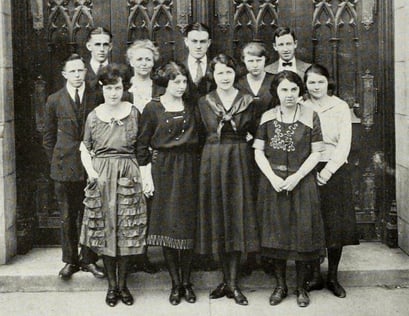 1922 French Club
In the early days, French Club was one of the most popular on campus. The club hosted several social events and even published a paper in French. 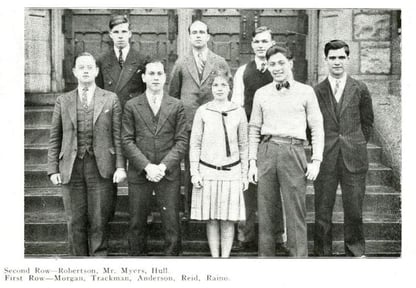 1930 Debating Team
The JJC Debating Team was one of the most successful and popular clubs in the 1930s. They would hold several practices and attend competitions throughout the semester. 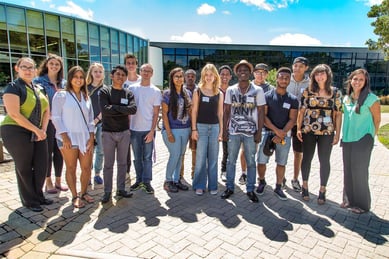 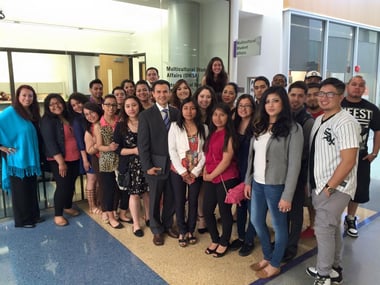 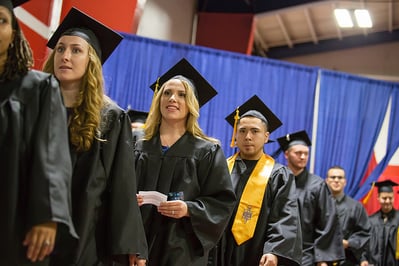 Spring 2016 Commencement
JJC celebrated its most recent commencement on Friday, May 13, 2016, with 581 students. Ivan Bew was the student speaker, and Margot Underwood was the faculty speaker.

To learn more about JJC history and how our school came to be the nation's first community college, we suggest "Joliet Junior College 1901 to 2001: A Pictorial History of America's Oldest Public Community College" by Robert Sterling. You can check out a copy at the JJC Library or click here.